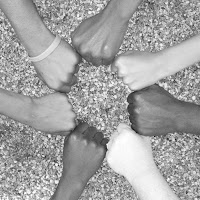 Participation has entered the mainstream vocabulary of development, and inclusion is following hard on its heels. Though practice has lagged behind rhetoric, more and more social groups have been identified as marginal or excluded, and their participation and inclusion is seen as priorities. So it has been with women, ethnic and religious minorities, refugees, and the very old.

Youth have been seen as a very different sort of category. Being at the ‘transition’ phase, youth are often seen as ‘people finding their ground,’ or ‘learning the ropes from the elders,’ and not as full, operational members of society. They are in a psychosocial moratorium, in the waiting room of society. They do not know everything yet, and can not do everything yet. In this deficiency model, young people are not always taken seriously. The concept of participation then becomes relevant; embedded in the theme of transition is a link between participation and gaining acceptance as citizen in all its dimensions.

The concept of participation has evolved from concerns of beneficiaries to concerns about forms of engagement by citizens in policy formulation and decision-making in areas that affect their lives. Participation is associated with citizenship. Citizens engage with government, not as passive recipients but as proactive consumers. As consumers, citizens ensure that government is held accountable, is responsive to their needs, and is a partner in development.

Legitimizing youth participation raises challenges for people who try to change the web of power relationships between adults, youths and institutions. These power dynamics influence youth capacity for participation through roles and relationships. Adults influence youth as facilitators and parents, and youth influence each other through peer relationships. The degree of youth’s ‘real power’ (Woollcombe, 1996) is one determinant in the type of genuine participation which could be achieved. Adults set a limit on youth capacity for involvement, providing support, or reinforcement to projects. This is particularly true for girls in developing nations. Intergenerational difference is exacerbated by the perceived ‘empowerment’ of youth.

Youth are as diverse as adults in their characteristics, talents, interests and passions. Their sub cultural norms can influence how adult initiated participatory projects are perceived and implemented by young people. For youth to exercise their rights and realize their citizenship, they need ‘real power’ (Woollcombe, 1996) to negotiate and work in partnership with adults and working through decisions and taking responsibility for actions and learning from outcomes.

Although youth participation is recognized as an ideal, there has been little serious investigation of the process of direct youth involvement in decision-making, and little critical examination of the impact of such involvement (Calvert, Zeldin & Weisenbach, 2002). Questions such as: “Are youth truly empowered?” “Do they want to be?” and, dare I say, “Are they capable?” have not been seriously investigated in the past. While many young people feel disenfranchised from the processes of power and their ability to make a difference, they still care deeply about issues relevant to them, such as education, employment, the environment, health, and sexuality (Hallett, 1999). Genuine participation in decision-making should deal with issues of most concern to them.

The society needs to start from the belief in the possibilities of young people to actually actively participate in society or specific parts of it. The attention should go out to the positive qualities and the potential of the youth. Such a basic principle or approach is called a competence approach. Young people need to be involved in the contextual factors which will best promote their capacity for participation. Degrees of participation should be evaluated from a perspective of whether the youth have benefited from the process and whether they have enjoyed it. It may be that youth actually engage in more genuine participatory roles through informal contexts. As the informal settings may provide more opportunity to communicate in their own language, develop competency in working with their peers and negotiating with the adults, and knowing that their activities are valued by the adults.

Young people cannot be both change agents in an anti-structural sense, and partners with the status quo (adults) at the same time. They may use existing structures as a way forward, but they also struggle against those structures in their search for satisfactory solutions to the issues they see as important.

Therefore, it is essential to create opportunities to share information with and involve young people, acknowledge youth leadership, and encourage responsibility. Young people should be active participants in their development, and not passive recipients of services. This includes the need for creation of an environment that supports the continued life-long development of young men and women’s skills and capacities, their involvement in democratic processes, and in nation-building initiatives.

Young people are in a special position where they contribute to social change. Often they do not have vested interests as adults. In their formal and informal groupings, youth around the world already play important roles as social actors and agents of change and the future of youth participation can build on this foundation, developing partnerships and celebrating diversity and innovation.

It is a challenge to institutions to become more open to the talent, enthusiasm and courage of the young.

For the complete article, go to http://www.takingitglobal.org/panorama/article.html?ContentID=4357

Picture by venegas under CC